The Tarantula GT-870 Mark 3 is a size three ballistic cannon capable of inflicting massive damage but with a high skill ceiling.

Nevertheless, hitting your target is a challenge. The fire rate and speed of the cannon are below average causing the pilot to have to take their time to line up shots. Top pilots can handle the skill requirement to be effective with ballistic cannons. Although hitting smaller ships is difficult, these cannons can be very useful against bigger ships.

The Tarantula Mark 3 has an effective range of 3118 meters. These cannons can out range a lot of size three weapons and below to keep you at a safer distance. The ammo count is much smaller then other cannons but the damage and range are significantly better.

Gallenson Tactical Systems has designed a powerful ballistic cannon that can deal lethal damage to your enemy in short time. Although requiring more skill then most weapons, the Tarantula will not disappoint on the battlefield. 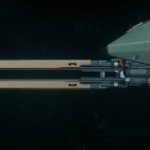