May 22
by StuFoo Inside Star Citizen

In this episode we take a look at damaged ship components, some core tech, and a quick tour of the 890 Jump.

We begin with with damaged ship components. Thrusters can now be damaged individually and all have their own hitboxes. Ships had to be adjusted so thrusters would be visible so players can shoot at them. Damaged thrusters or other damaged components can also cause damage to nearby components. There are also new VFX that happen when the thrusters take damage at varying levels. You will be able to use piercing weapons to strike through hulls to hit thrusters or other components directly.

Next up CIG goes over how the client talks to the server. The original Star Marine setup had players warping around too much but now if there is a bad connection, instead of you seeing others warping around, you will warp on your screen but remain normal looking to others instead of degrading everyone else.

There is work being done on harvestable entities that can spawn at varying distances and densities. This tech could also be used for surface side mining entities and asteroids in space.

There is a rework for the subscriber program that will include items that you can’t get anywhere else. The materials team is working on new textures for the Banu Defender. The art team continues work on the shared resources that will make up most of microTech’s interior and exterior.

The 890 Jump is a luxury ship in its final art phase. This ship will be used for parties, meetings, and other forms of entertainment. It has a giant bar area and a pool with other cool amenities. 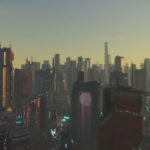