Apr 29
by StuFoo Inside Star Citizen

Inside Star Citizen is the new weekly update show replacing Around The Verse it seems. In this episode the team goes over a new particle lighting system, public telemetry, Crusader’s city in the clouds, and upcoming improvements to a classic ship. SCT will breakdown the video and give you the finer points below.

There is a new particle lighting system replacing the CPU based one with a GPU based system. A big difference between the two systems is the ability to implement new features that allows for higher visual quality. The shadows are a lot more effective visually and less intensive with major FPS improvements.

Next up we get an inside look at the new Vanguard interiors. As a longtime Vanguard owner, I have to say that this update on the ship is fantastic. Lots more room to move around and components areas are being implemented. With the new improvements comes modules. The center section can be swapped out for different modules.

Next the art team talks about the upcoming floating city around Crusader named Orison. Orison is the second planet in the system and owned by Crusader Industries. The city is floating in the clouds with a series of networking platforms holding it up with help from the unique properties of the planet. The main function is to create the big commercial airliners for Crusader Industries. 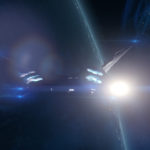